One of the most common aphorisms in investment is that the markets hate uncertainty.  Businesses hate it, too, and for good reason.   Businesses make money by investing in the ability to deliver their goods and services more efficiently, and make their money back through increased profit margins on each future sale.  But if they plan for a growing market and it shrinks instead, they’re left with the bill for all those investments.

Despite this, it seems like big businesses and investors have gotten pretty good at ignoring the risk of uncertainty because so few of those risks have become a reality recently.  Despite political friction, the United States is still trading with Mexico, China and the EU.  Despite a government shutdown, the economy is still growing.  Despite a precipitous stock market drop between October and January, it has recovered nearly all its losses since then.

Small businesses can’t afford to ignore big risks, however.  Short-term risks are still very real for them. Unlike giant corporations, they don’t have billions of dollars in the bank to hedge against the risk of overspending. 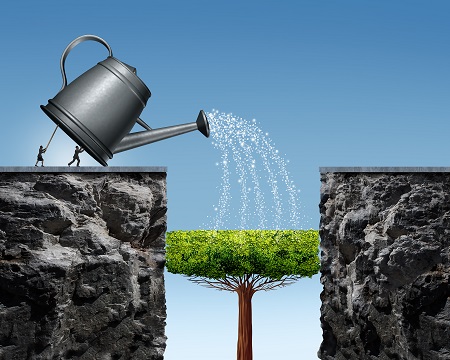 After managing the day-to-day operations and planning investments around short-term risk, it’s difficult to find the time to look five years ahead and ask what’s coming next.  But there are plenty of good reasons to take the time at least once a year to plan where you’re driving the business.  In the words of Yogi Berra, “If you don’t know where you are going, you’ll end up someplace else.”

The Importance of Momentum

The most important reason to have a vision of how your industry will operate in five years is to ensure your company is always generating momentum towards better operations.  With the current rate of technological change and globalization, it’s difficult to think of many industries which will experience little or no change in the next five years.  In the world of business, if you’re not moving forwards, you’re moving backwards.  One of the most important catalysts for forward movement is for your employees to collectively believe they need to reach a specific level of improvement over time to remain competitive.

Given enough time, one revenue stream will always turn into zero.  In 2000, the PDA maker Palm’s market valuation was $54 billion.  The PDA market was nonexistent by 2010, and they were acquired by Hewlett-Packard for $1.2 billion.  Palm was destroyed in part by then-phone maker Blackberry, which itself had a market value of over $80 billion before dropping to less than $5 billion by 2012.  Blackberry doesn’t even make their own phones anymore.

It’s true that technology moves faster than most industries, but it’s also true that most businesses don’t see these giant disruptions coming along in time to react to them, regardless of which industry they’re in.  Companies that have several materially significant revenue streams are less likely to fold when one of them gets disrupted.  One of the best ways to build new revenue streams is to ask “what will the market need in five years that I’ll be in a position to deliver” and start building products and services that can solve those problems.

There’s also the traditional reason that most companies engage in long-term planning, which is to make financial decisions they’ll have to live with for years or decades.  If you’re signing a three or five year lease for a building, you want to make sure that you aren’t going to outgrow it in that time.  If you’re buying a building, it’s best if you don’t outgrow it halfway through paying for it.

As a managed IT service provider, one of the areas that we run into capital planning most frequently is when it’s time to do major server replacements.  Because these projects can be expensive and have cascading impacts on your computer network, you want those servers to last their entire 5-year lifespan before they need to be replaced.  Planning for too much growth requires purchasing expensive computing power that you won’t need; planning for too little growth will force an expensive network upgrade before the existing hardware would otherwise need replacing.

Companies that consider their growth trajectory in the wider context of new revenue streams and expected disruptions in their industry are in a much better position to forecast their technology needs than those who simply look at a chart of their historical growth and project it forward.  They’re also in a better position to capitalize on market opportunities, boosting both their company size and profit margins.  For these reasons, we encourage our clients (and all other businesses) to take the time to consider the long-term opportunities for their company, and determine the ones for which success will require laying groundwork years in advance.

To learn how WingSwept can help your company make better long-term technology decisions, call us at 919-779-0954 or email us at Team_WingSwept@WingSwept.com and ask about our managed IT services offering.